“Living in rural Tennessee, I am privileged to have developed strong lasting relationships with many of the clients we have had the honor to assist.  Clients are not dollars signs or case numbers.  Our clients are our neighbors.  We hold ourselves accountable to them as we work to achieve the best possible result under the circumstances in each case.” 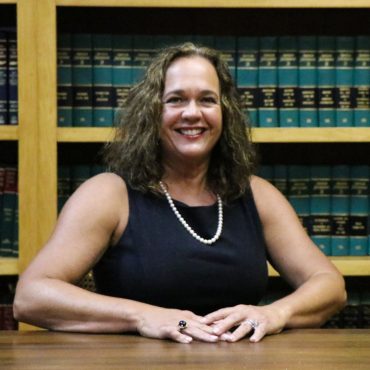 Debbie Campbell Holliman was born on February 5, 1960 in Elizabethton, Tennessee. She grew up on a dairy farm along the Watauga River  in Carter County, East TN, which has been in her family since the 1700’s.  She attended East Tennessee State University where she graduated in 1981 with honors, with a major in Political Science and a minor in Business.  She then graduated from the University of Tennessee, George C. Taylor School of Law in Knoxville, Tennessee where she received a Doctorate of Jurisprudence in 1984.  After graduation, Mrs. Holliman relocated to the Middle Tennessee area with her husband to his family farm, E. Guy Holliman.

When not practicing law for a living and in order to retain a semblance of sanity, Debbie and Guy work on the 300 acre century farm where they live. Their livestock includes Angus beef cattle, horses, burros, chickens, cats, dogs, and pure bred, New Zealand and commercial meat goats. (For more information on the goats, see Holliman’s Southern Cross Farm on Facebook)